I was a Fairtax supporter, even before Boortz wrote is BS book about it.
What first gave me pause is that Fairtax's OWN 'researcher' said, essentially, that they were fake. Dale Jorgeson, who Fairtax tried to pass off as their own 'world expert' on 'embedded taxes', came out and said Fairtax was all wrong.
I watched how Fairtax's Neal Boortz handled that stunning admission by their own guy, and knew something was up.
The footnotes and fine print inside HR 25 is the important thing, and it's beyond goofy. For example, section 2a, subsection 7, they have 'offhandedly' defined every government is 'a person' THen in subsection 12, 14, and 17, they offhandedly mention that the government is a 'taxable employer', and that 'wages' means all compensation, including pensions.
They twist things around to where it SEEMS this is a 'normal' but very high retail sales tax.
No -- not even close. In fact, over 80% of the plan has nothing or little to do with anything normal retail sales tax.
For example, who ever heard of a retail sales tax on PENSIONS -- they have over 300 billion dollars in taxes that city, county, and state governments have to pay, much of it as a tax on wages and pensions!
Fairtax own spokesmen bragged about these seemingly bland details, that they were the 'legal basis' for making every city, every county, and every state pay taxes --- IN ADVANCE -- on not just wages, but pensions, and most government spending.
The only government spending they 'remove from the tax base' (meaning, they don't tax it) is education spending, and foreign travel.
Everything else is 'in the tax base'. They never say 'we tax this' or that. They just 'remove' one or two things from the tax base, leaving everything else -- including military spending on the wars -- in there.
Fairtax tries to make everyone think it's a 'retail sales' tax. Nonsense, that is only about 18% of it. 82% of their preposterous math is made of up taxes on city, county, states, and mostly, the federal government. They have -- I kid you not -- over 800 billion dollars that the government pays ITSELF, and they count that as spendable income. It's goofy. I mean REAL goofy.
It's clear to me that their own leaders know this is one goofy plan. OH it sounds great. But it's sooo goofy, and sooo deceptive, that they would be laughed out of town if they ever showed up for hearings under oath. Its more of a Marx Brothers Movie than anything else.
THE last things these guys want in to go under oath and defend this really wacko stuff.
Tje math is really bizarre. New York City government, for example, would owe 8 billion dollars, 3 billion of which would be IN ADVANCE.
THe state of Texas would owe 12-14 billion, 5 billion or so -- IN ADVANCE.
The 'in advance' detail they hide in a footnote -- footnote 19 in the Fairtax document 'Comparison of the Fairtax Base'
THey have a cancer surgery tax, a heart surgery tax -- they tax EVERY dime of medical spending. And get this, their math allows for NO, absolutely NO exceptions or exclusions. In their fine print, the person 'using the service' is liable for the tax.
Do they really expect cancer victims to pay, on average, 40,000 dollars in TAXES on their surgery and chemo? No exceptions? If you only make 10K, do they really expect you to pay 40K just on the tax?
No, of course not. But that is the only way their math can add up. They do all this bogus deception in fine print, and other tricks, for ONE reason -- to make their math SEEM to add up.
Do they really expect New York City, or Dallas, or Chicago, or Philly, or Houston, to pay half billion dollars, or 8 billion in case of NY, much of it in ADVANCE?
Hello no. But they had to sneak crapola like that in the fine print, so their math could add up.
This has been exposed over and over, but Fairtax has a concerted, funded effort, to spread their deceptions.
I don't have any idea who is funding it, but Neal Boortz said they offered him and Sean Hannity a gulfstream jet to fly around and push this. Boortz knows this plan is goofy as hello, you can tell by some of his writings since Jorgenson pulled the rug out from under him.
FOX News and Mike Huckabee have pushed it. Now, Hermain Cain is. It's impossible to tell if Cain is just fooled by the hustle, or if he believes this nonsense.
Bruce Bartless of National Review calls Fairtax 'transparent silliness' and said if it somehow got passed (it won't -- they are NOT serious about passing it) there would be rioting in the streets because the ACTUAL tax rate, using real math instead of bat-ship crazy nonsense, would be over 80% sales tax -- NOT the 23% these guys want you to believe.
William Gale and the Joint Committee of Taxation did s atudy of Fairtax, the report is online. Essentially-- using real numbers -- they showed Fairtax was preposterous.
We need a new tax code -- that is true. But oddly Fairtax leaders are content with pushing this BS to the public, but NOT trying to pass it.
The only folks trying to pass it, are those who were duped by the glitter and bs
I have several blogs about it, and you tube videos. I spent a lot of time on this, because I liked it at first, and then found out, over time, that it was basically a bogus hoax, and they KNOW it.
http://bit.ly/j0IQCK
http://fairtaxopenletter.blogspot.com/
Contact me if you want more information. I can probably steer you in the right direction if you want to really see what's going on in their legislation.
I don't know sickem about who is behind it, but I know quite a bit about the legislation, and the hustle overall. 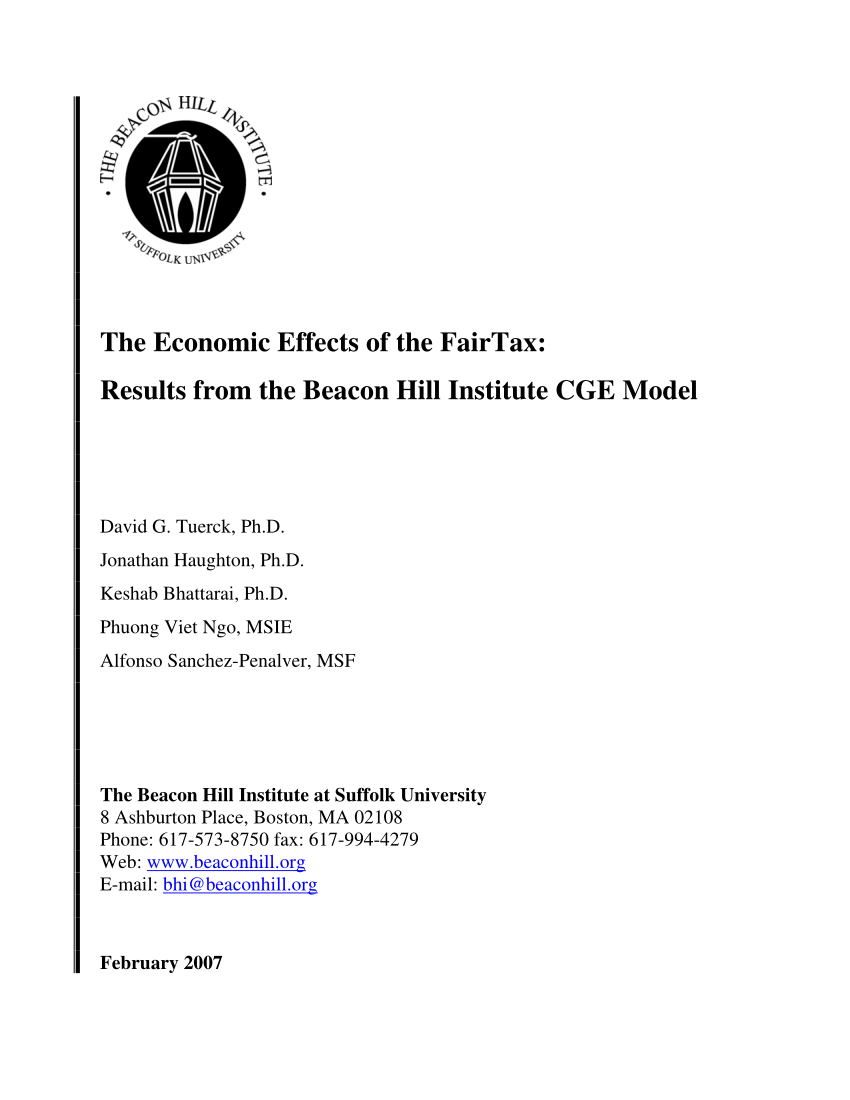