Don't Retire PDF Free Download Posted: admin On 12/4/2021. Don’t Retire has solid, practical advice for anyone who believes the best is yet to come, that comfort zones are made to be stepped out of and that the ideal way to approach the rest of one’s life is with zest, gusto, enthusiasm and, yes, zeal. Don’t count the days, make. Don’t Retire, if any member of your Last-Minute Gang calls you to do something, you’re not permitted to say no unless you have a legitimate reason – they’ve invited you to dinner and you’ve already eaten. Even if this is the case, suggest that you still get together for a different activity – how about going to an escape room?

Prices vary by retailer
Refire! Don’t Retire asks readers the all-important question: As you approach the remainder of your life, what are you going to do to make it joyful and meaningful?

Ken Blanchard and Morton Shaevitz point out that too many people see their later years as a time to endure rather than as an exciting opportunity. Both research and common sense confirm that people who embrace these years with gusto — rather than withdrawing or waiting for things to happen — consistently make the rest of their lives the best of their lives.
In the trademark Ken Blanchard style, the authors tell the compelling story of Larry and Janice Sparks, who discover how to see each day as an opportunity to enhance their relationships, stimulate their minds, revitalize their bodies and grow spiritually. As they learn to refire and open up to new experiences, Larry and Janice rekindle passion in every area of their lives.
Readers will find humor, practical information and profound wisdom in Refire! Don’t Retire. Best of all, they will be inspired to make all the years ahead truly worth living.

Ken Blanchard is the founder and chief spiritual officer of the Ken Blanchard Companies. One of the world’s most prominent authors, speakers and consultants, he is the author or coauthor of more than 60 books.

Morton Shaevitz is the clinical director of Shaevitz and Associates, an associate clinical professor of psychiatry at the University of California, San Diego School of Medicine and the chair of the geriatric psychology section of the California Psychological Association, and he has served on the Leadership Council of the Stein Institute for Research on Aging.

Why are many older adults shying away from technology?

“I don't know how to turn my GPS on, or how to put in the address. So most of the time I ask other people to drive me or ask for directions like I always have.”

“I don't have a computer and I'm not going to get one. It’s just too late for me to learn.”

“Me? Get a cell phone? No way. If people want to talk to me they can just call me at home.”

“What is this whole Skype or scoop thing all about? It just doesn't seem natural to talk to somebody looking at a screen.”

This is what I hear from many older adults and are examples of Geriatric Technophobia.

Let me break this term into two parts.

The best definition of Technophobia is on Wikipedia: “the fear or dislike of Advanced Technology or complex devices, especially computers.” Advanced Technology can refer to using a computer or tablet, getting on the internet, using a Smartphone, connecting on Skype, or any other such advances of the last few decades. For some who may be reading this blog, almost all of the above may be mysteries. In fact, likelihood is that if you identify as a technophobe, someone else probably printed this article for you or handed you a device with it already displayed.

So what about the term Geriatric Technophobia? What I suggest by adding the word “Geriatric: is that this phobia is more likely to be found in older adults than adolescents, millennials, or boomers. I also believe that this fear of technology is not a result of advancing age, cognitive decline, or early Alzheimer’s. Rather it is how one approaches these technology challenges, or to put it bluntly, a matter of:

By succumbing to Geriatric Technophobia, many older adults are limiting their lives, cutting themselves off from opportunities for learning, becoming more isolated, having difficulty in communicating with family (particularly children and young adults), and that it is a malady that is easily overcome.

Now, before you accuse me of perpetuating a negative stereotype about older people, I have the numbers to back up what I say. According to a study from Independent Age in 2010, 70% of those over 65 reported that they had never used the internet. And there’s good reason that many older adults aren’t embracing technology at the same rate as their younger counterparts—older adults weren’t born into technology as their children and grandchildren were. If today’s older adults wish to adopt technology—it is just that. They have to adopt it, learn a new language, and then re-learn it as terminology and technology change and evolve as they often do. Even when older adults are amenable to this challenge, they may be thinking, “what’s the point of learning this stuff if there’s no way of keeping up and no one is helping me?”

Here are a few stories which illustrate this point:

“I'm more comfortable buying things in a store. But when I tried to talk to someone about getting a laptop computer or some kind of tablet, the salespeople either used words I couldn't understand and were condescending. No one asked about what I wanted or needed. A total disaster, and a waste of time.”

“I had been using my phone to take pictures. I had this trip coming up, so I splurged on a small digital camera—bad decision. The instructions were incomprehensible, and the print size was so small I could barely read it. When I called the customer service number, I got someone who I couldn't understand and couldn't understand me. So I said, ‘to hell with it,’ and got my money back.”

“I decided to buy a new car, I figured I would want to get all of these safety features I heard about. You know, like knowing if there’s a car in your blind spot or something that automatically slows me down if I get too close to the car in front of me. After I got the car and started driving, it was awful. There were all of these noises and beeps and chirps. The people at the dealership were no help at all. They didn't explain anything in a way that I understood, so I turned the car back in. I'm getting a less expensive model without the bells and whistles, but one that I feel comfortable with. It’s their loss and not mine.”

While all of this anecdotal evidence reflects real life scenarios, the numbers on Geriatric Technophobia are changing, and for the better. More and more older adults are choosing to challenge their own Technophobia. In 2010, AARP published a study by Jean Koppen noting that 40% of adults over 50 are not only using the internet, but are also comfortable with it. As of 2012, for the first time, more than half of adults 65+ were internet users, and by 2014 that number was more like 59%. More of those over 65 are choosing to move past their concerns to take advantage of what technology has to offer. But change is happening too slowly.

There truly are legitimate barriers for older adults wishing to use technology. These include physical challenges to using technology (sight, dexterity). For example, around 40% of seniors have a disability, chronic health condition, or condition that makes reading difficult. According to a Pew study, “This group is significantly less likely than seniors who do not face these physical challenges to go online (49% vs. 66%), to have broadband at home (38% vs. 53%), and to own most major digital devices.

Older adults may also have skeptical attitudes about the benefits of technology. It may be taken for granted by younger generations, but “the belief that technology is a good thing per se doesn’t necessarily exist amongst older people.”

Difficulties in learning new technologies may also preclude the use of new technology. In one poll, only 18% of older adults claimed that they would feel comfortable learning to use a new device (i.e. tablet or Smartphone) on their own. All of these are legitimate roadblocks to getting online and into the digital age.

When I spoke with my adult daughter about the idea for this blog, she rightly pointed out that the whole notion is counterintuitive—an online blog post about Geriatric Technophobia? Wouldn’t the target audience be unable to read the actual information that might benefit them due to their lack of internet use? I was amused at my own naïveté. It was a good point. Nonetheless, I kept writing, convinced that there must be a way to get this information out there.

So here’s your call to action—share this article and, better still, offer to share your knowledge with an older adult you care about. My friend and coauthor, Ken Blanchard, is a proponent of what he calls Intergenerational Mentorship. Each generation has something to teach another. As I mentioned before, it is all about relationships. Technology for its own sake doesn’t benefit anybody, but technology that brings us closer and even forms new connections? That’s something worth plugging in for. 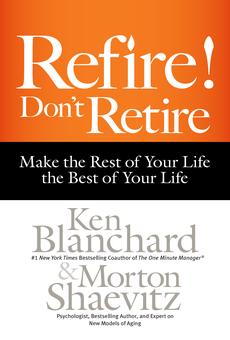 Writing this blog has been a humbling experience! When I began thinking about this topic, I was writing for someone else. Yes, I certainly fit into the age demographic, but hey, I use a computer and send and receive emails throughout the day. I have a tablet and a smartphone that I use to talk, text, and send pictures to family and friends.

I even have an Apple watch and get to talk to my wrist a few times a day, which is a crowd stopper wherever I am. So, I was one of the cool older guys writing this for my less advanced demographics. Yeah, right!

The day I was editing the final draft of this blog, I brought my smartphone to my assistant because it hadn’t alerted me about an incoming text message from a client about changing an appointment time. I wanted this to be fixed, so I wouldn’t miss any more messages in the future. My assistant opened the settings in my phone and made sure the volume was high and alerts were all set to beep appropriately. As she was handing my phone back to me, she pointed out the small number “10” in a red circle on the messages application of my smartphone. She mentioned that it looked like I had ten unread text messages, explaining that the circled number represented texts that hadn’t been opened. All the swagger I had about being one of those “cool older guys” suddenly faded.

The moral of the story is that technophobia affects even the smug tech-users of the older crowd. Please accept the above post as being written by someone who is not necessarily the cool older guy, but by a humbled compatriot who is trying hard to stay on the path to technological enlightenment.